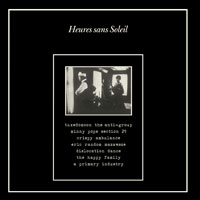 “The compilation album Heures Sans Soleil was originally released in October 1985 in an edition of 1000 copies. It was the fourth vinyl release on LTM, the label I founded while still at school in Edinburgh, and followed on from singles by Minny Pops and A Primary Industry, as well a live album by Crispy Ambulance. The title translates as ‘hours without sun’, and so it’s somewhat ironic that HSS was put together during the long summer holiday after my first year at Glasgow University. Nevertheless, the fact that LTM still works with most of these artists more than three decades later instils in me a warm glow.”

SIDE B
Dislocation Dance – The Next Year I Returned To St. Michelle (But Marie Had Gone And With Her My Childhood) 4:59
The Happy Family – March In Turin 4:50
Section 25 – Hold Me 5:58
Crispy Ambulance – Rain Without Clouds 2:09
A Primary Industry – From This Prospect 4:31

© 2016 Song Cycle Records Ltd. All rights reserve
Back to Top